I am a virologist with a background in genetics and microbiology. My research interest since the mid-1980s has been largely focused on the AIDS virus, HIV-1, particularly how it replicates in macrophages and how smart nucleic acids can be developed to prevent its replication. I teach virology to medical students at Oxford University and am a Fellow of Brasenose College. For six yeats (2011-17) I was also the University’s Pro Vice-Chancellor for Planning and Resource Allocation.

You can view my brief, introductions to evolutionary sciences, particularly population genetics and phylogenetics now on YouTube.

Sally Cowley joined the Sir William Dunn School  of Pathology as a Wellcome Trust Career Re-Entry Fellow in 2007, engaged in a program of research into the differentiation of human Pluripotent Stem Cell-derived macrophages and their applications for HIV studies. With William James, she set up the James Martin Stem Cell Facility, affiliated to the Oxford Stem Cell Institute, for work with human Pluripotent Stem cells.

Jane Vowles joined the Oxford University Dunn School of Pathology in 2010 as a research assistant generating iPS cells from Parkinson’s Disease patients as part of a large scale Oxford Parkinson’s Disease Centre research programme funded by Parkinson’s UK and then  StemBANCC project which established a panel of iPS derived cell lines from 500 patients as a platform for cellular phenotypic drug screening with industry partners.  She has also gained experience in Crispr Cas9 gene editing techniques.

She graduated in Agriculture from Reading University in 1981 and began her career working on reproductive physiology of ruminants at the Agricultural Production Research Unit at Reading. 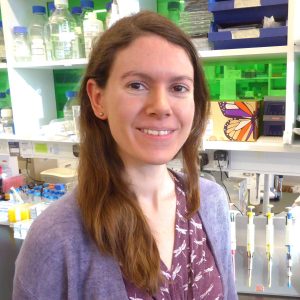 Ben graduated from Sheffield University with a Master’s degree in molecular biology in 2014. Alongside his studies he worked in assay development for the biotech company R-Biopharm, and also took up a project at EMBL in Heidelberg working with mouse embryonic stem cells.  His focus on stem cell biology continued during his Master’s degree, working for Pfizer in the field of regenerative medicine. He has recently handed in his DPhil thesis on naïve human pluripotency, which he completed jointly in the William James Lab (Sir William Dunn School of Pathology) and at F. Hoffmann-La Roche in Basel. Ben has now secured pre-seed funding to commercialise findings of his thesis and his specific interests are the role of miRNAs in pluripotency and gene-editing.

Alun is DPhil student on the Wellcome Trust Infection, Immunology, and Translational Medicine (IITM) doctoral programme. He started his journey into science doing a BSc Biomedical Sciences at UCL, from which he transferred to a BSc in Infection and Immunology for his final year. In this year he focussed his interests in infectious diseases onto virology, carrying out a dissertation project in the Tower’s lab working on new drug therapies for HIV-1 aiming to block interactions with host co-factors.

It was in the Tower’s lab that he first encountered and developed an interest in the Cyclophilins, a family of proteins with unclear functions and often found to interact with viruses. He wanted to see if they may be involved in the innate/antiviral immune response, but to achieve this he needed to knock out each family member. This ultimately led him to the James lab, where using their stem cell derived macrophages he has been able to explore the role of Cyclophilins in innate immunity and viral infections.